After all that traipsing over the Blue Mountains it’s time to make life easier with a map to help you locate the Evans survey pillars. It’s a Hide & Seek Map so it’s not to scale but a guide to locating the pillars in relation to the Great Western Highway, the Western Railway Line & the relevant railway stations with clues to help you find them. 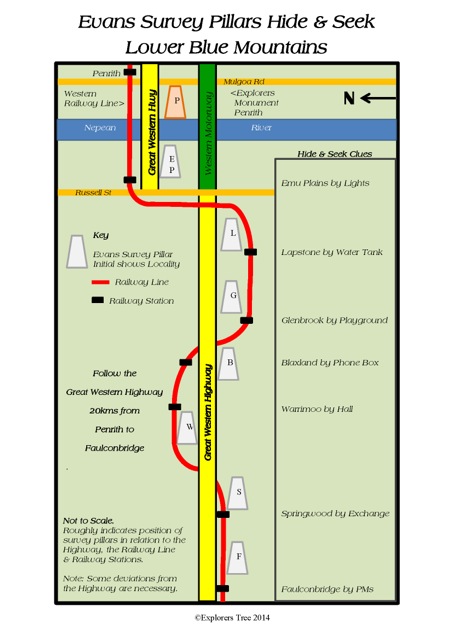 From November 1813 to January 1814  George W. Evans followed & surveyed the route the explorers took in their Blue Mountains Crossing and which the ‘Footsteps in Time’ survey pillars commemorate. Governor Macquarie ordered the construction of the new road west from Emu Ford to Bathurst which was to follow Evans’ survey, where possible, with the 101 1/2 miles or 162 km being completed on 14 January, 1815. Historically, the highway & the railway have run in tandem to each other but over time there have been many changes. None the less, the majority of the Evans survey pillars are still close to the present highway, although deviations & some searching are still necessary to locate them.

Lapstone & Glenbrook, in particular, have had many changes to the railway line with the original 1867 Zig Zag Railway, 1892 Tunnel deviations, 1913 Viaduct & Glenbrook Gorge Tunnels meaning Glenbrook Railway station is no longer by the highway but on the southern side of the village. If you stop at the Glenbrook Visitor’s Centre you will find the Evans Survey Pillar not far way. The original 1870’s Railway Pointsman’s Cottage became the Station Masters Cottage after 1913 when the new railway station opened and was found when the nearby petrol station was being redeveloped. Have you driven past this railway cottage at Glenbrook? 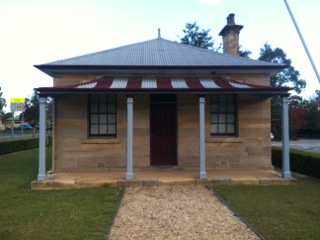 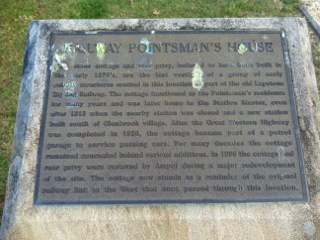