A Welcome Beacon in the Wilderness.

There was a beam to be removed at the crossing of the creek and the boy asks the child to get off and move it. This necessitates getting the only dry article, the saddle, wet. It has been mutually agreed that the boy has charge of the trip going and the child returning, so the child much to his disappointment removes it, but in his mind’s eye puts a black mark for reference later on. It is extremely difficult to mount again owing to the heaviness of wet clothing. It becomes colder but the lightning ceases, which is a great relief as on several occasions it flashed very brightly amongst the trees.

The child can feel the rain rippling along his skin in various parts but contemplates that the boy’s condition must be worse as the child has good leggings, a macintosh, soft shirt and slouch hat whilst the boy set out in white shirt and collar, boxer hat and a light, thin, summer overcoat. The horses start sometimes when a great tree crashes down heavily, a long distance off but giving a report forth like a cannon shot. We give each other riddles to pass the time, we argue over the most trifling matters. Growl at one another for no cause whatever but still we seem to go on and on for hour after hour without reaching Jensen’s. It is too wet to strike a match to see the time. A log burning on the inside, the remains of a bush fire, gives us hope that it is our destination and this delusion helps us onward many a mile. At least the seemingly endless path twists quickly from the right side of one rage to the left side of another and we see a light shining through a small window. No captain of a vessel ever saw a lighthouse with greater joy than we saw that beacon light at Jensen’s.

We ride up hurriedly; call out, our horses’ neigh and a dog’s welcome bark is heard. Jensen appears at the door with a candle in his hand, dressed in a night shirt. We tell him our requirements and in a few moments he dresses, gets a lamp and accompanies us to the stables 100 yards away. Twenty minutes are then spent in coaxing the child’s horse to enter the rough stable but at length, its obstinacy is overcome. We feel them and see by the lamp that it is 2.30 a.m. and therefore we have been in the saddle for over eight hours. The three of us indulge in a stiff whisky each and it burns the throat of the child but the boy swallows it like water.

We then have to smile at each other’s appearance. The boy’s hat now looks like a soft, black one; his collar resembles a paper one and his tie has shed all its’ dye colour whilst both of us are splashed from head to foot with mud and slush. We, however, fondly imagine that we have dry sleeping apparel in the boy’s much praised (over muchly) American leather pack but upon opening it there is a curious puddle. The rain had penetrated through and through and worked up with a small cake of soap and the continual jolting a splendid lather, which pervaded all the parcel. There was grim satisfaction to the child on seeing that cuffs and collars, belonging to the boy, which had been secretly placed in against holiday rules, were reduced to dirty shapeless lumps of wet linen. We intended to go to the short rough beds naked but Jensen brought out two small shirts that had evidently done duty for him in past days. They were very short and the one the boy put on was useful only as a chest protector. The boy growls at the hard bed, the chest protector and the lack of clothes but the child sinks into a sound sleep at once and we both wake at 8.30 on Friday morning and hear the rain still pouring down.

What a long, eventful day! It has taken the last three blog posts to cover Samuel’s journey from Cunninghame to Orbost where he met his brother, William before riding off together into the approaching night towards Jensen’s, deep in the Gippsland Forest. Imagine my delight to actually find the picture above of Jensen’s (Danebo Hotel, at Martins Creek) near Bendoc and Bonang. Monash University has this photo, the one of Peter Jensen with a horse and another of clearing around Jensen’s home which you can find through Trove or Monash University‘s Centre for Gippsland Studies. Today, it would take 2-3 hours rather than the 19 hours it took Samuel to travel the 34 miles from Cunninghame to Orbost followed by another 34 miles to Jensens. Nowdays, the hotel is long gone but the Martin’s Creek Rest area on the Bonang Road marks the site, although it is still hard to find even on Google maps. It’s still in the middle of nowhere, but this site has a photo and map, if it helps. Here’s a little snippet about Tenders for Orbost Shire Council from the ‘Bairnsdale Advertiser and Tambo and Omeo Chronicle‘ from 1898 that also mentions some of the people and places Samuel has visited during Easter 1902. 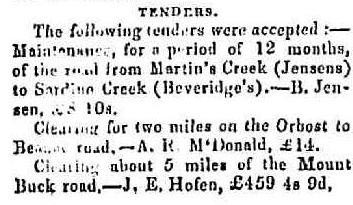