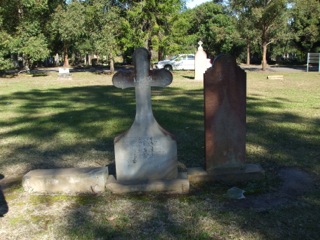 Cemetery Transcriptions are another way to trace family members you may be looking for, through inscriptions on headstones and memorials in cemeteries. It’s always rewarding to find where all the members of a family are located so they are remembered and included, especially if they died young or were not married. After checking if the cemetery or crematorium has an online deceased search, look for any records of inscriptions or photos of the headstones. The Society of Australian Genealogists (SAG) has produced transcriptions of Rookwood Cemetery, Waverley & South Head Cemetery and Macquarie Park Cemetery which are on CD Rom and available at many libraries as well as Find my past for the various denominations at Rookwood. They do not include photos of the headstones. Otherwise, it’s worth checking the Australian Cemeteries Index  where you can search by state, cemetery or name and may be rewarded with a photo as well or details of transcriptions. If you’re unsure about when or where someone died try the Ryerson Index to death notices and obituaries in Australian Newspapers or the digitised newspapers themselves online at Trove.

Fortunately, a search of  the SAG Rookwood transcriptions for O’Reilly allows us to match the names & ages against the list of children on John & Ellen O’Reilly’s death certificates, although you may have to look up death or funeral notices to find the married names of the women. Although our O’Reilly babies did not have headstones an extremely useful feature once we located the nearby headstones was the option for a list of nearby headstones that confirmed the lack of surviving headstones in this area. 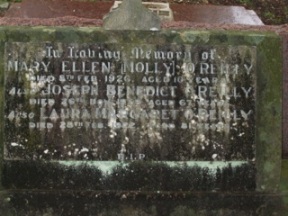 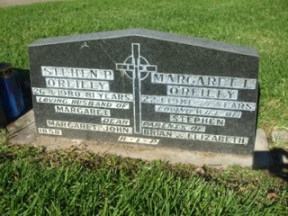 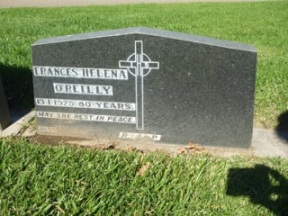 If you locate someone on the deceased search but not on the transcriptions then there is probably no headstone, but it’s always worth a ‘look see’ if your going there anyway. Neither John nor Ellen were listed or had a surviving headstone, but many of their children were. Although, their eldest surviving daughter, Ellen Mansfield was not listed there was a small plaque for her, but not for John, Ellen or Johanna O’Reilly who are in the same plots. The search of the transcriptions found 129 records for O’Reilly or 141 records if you broaden the search to those that also sound similar. Reilly resulted in 126 records or 494 similar sounding ones but did not duplicate the O’Reilly results. Some of the name variations for O’Reilly were O’Riley, O’Rielly and ORiel while Reilly included Realey, Reale, Reily, Riley, Rily, Ryle, Rial, Riel,Rahilly, Rhall, Rolley and Rowley. Isn’t spelling a wonderful thing when you get it right? It can be a nightmare.

Along the way, I found Peter & his wife Irene at Field of Mars Cemetery, Ryde which was also in the Sydney Catholic Cemeteries online database. That’s John, Ellen and ten of their thirteen children we’ve found listed, now all we had to do was actually go and find them in five different sections of Rookwood Catholic Cemetery and one at Field of Mars Cemetery, but that’s all part of the adventure isn’t it?