In Search of Substantiating Evidence

In Australia, we are extremely fortunate with the information available on our Birth, Death & Marriage Certificates and our free online Newpapers at Trove. After recently purchasing some Birth and Marriage Certificates from England, I needed some additional family information. I started by hunting out the British Newspapers Online, in the hope of finding some relevant Family Notices. I didn’t but this is what I did find:

The British Library‘s collection of newspapers includes the British Newspapers Archive which is available online and free to search, but unfortunately costs to view the pages. If you choose to register you receive 15 free credits to start with or there’s a choice of packages depending on cost, time and pages viewed. I didn’t find the Family Notices I was looking for anyway and didn’t need to sign up right now.

I started with my local library but they didn’t have free access to the British Newspapers Archive. If you are a member of the National Library of Australia (NLA) you can access the pages you found in your search of the British Newspapers Archive in their Canberra reading rooms. Another alternative for NLA members are their other e-resources which include overseas newspapers which are sometimes available for free or by logging in with your NLA Library Card.  I found the newspapers for the United Kingdom included the Times Digital Archive 1785-2008 which is available online and free to NLA card holders.

I was actually looking for bombing at Erith during World War II when I found an article about the 1924 Erith Explosion on Trove in the Adelaide Chronicle of February 23 & 29th, 1924 with this photo of the grim scene where 11 women and one man perished. 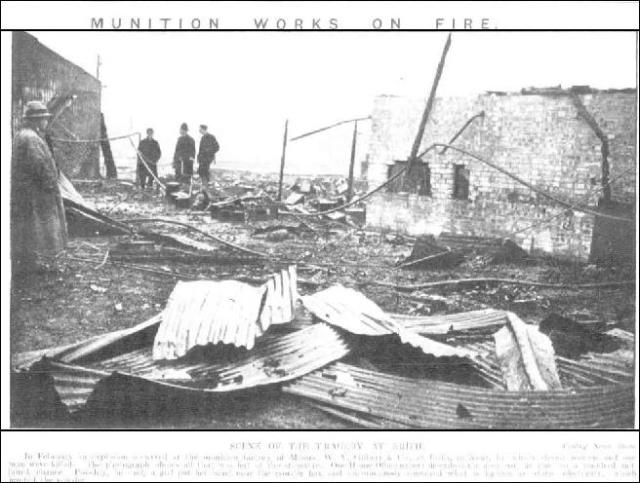 No luck today with the World War II bombings of Slade Green/Erith where an incredible amount of bombs were dropped in the area. There’s a mind blowing Bomb Sight map of the bombs dropped during the London Blitz between the 7th October 1940 to 6th June 1941. Your able to search by town or even by street for Erith or elsewhere and marvel at how your ancestors ever survived. Bexley Burough’s Local Archives also includes photos of Erith, the War, family and local history information. The newspapers I want don’t appear to be available online as yet.

However, fortune was smiling when I found the 1866 pictures of the Visit of the Prince of Wales to the Training-Ship Worcester in the Illustrated London News (London, England), Saturday, July 07, 1866; pg. 17; Issue 1379. Pity I couldn’t include the etching for you. A totally unrelated ancestor just happened to have trained on this vessel between August 1864 & August 1866 and would have been on board at the time, presumably. I had no idea it was actually at Erith as it was usually described as being the ‘Thames Marine Officers Training Ship as in this 1864 Trove article on the Royal Navy and the Mercantile Marine’. Thanks, for unexpected surprises!