At Berrima Marketplace Park there are a few odd sandstone blocks near the carpark. The plaque tells us they are from the original Berrima Bridge built by convicts for David Lennox in 1836 & restored in 1860 & 1897. Surely, there is a story here to investigate & a lot more blocks somewhere else, so let’s explorer further.

END_OF_DOCUMENT_TOKEN_TO_BE_REPLACED

If one tries to think about history, it seems to me – it’s like looking at a range of mountains. And the first time you see them, they look one way. But then time changes, the pattern of light shifts. Maybe you’ve moved slightly, your perspective has changed. The mountains are the same, but they look very different.

History is everywhere. Robert Harris considers history to be ever-changing as it reflects our perspective which is determined by the time & attention we give to details such as people and places. On a recent visit to Berrima, I noticed some beautiful old trees & a pile of sandstone blocks in the park near my favourite cafe, so I decided to explore further.

END_OF_DOCUMENT_TOKEN_TO_BE_REPLACED

As we rely more & more on the internet, we also depend on a vast army of volunteers who help to transcribe automated transcriptions on sites such as the National Library of Australia’s Trove for Newspapers or the State Library of New South Wales’ Amplify for oral history recordings. The Australian Museum also has Digivol where volunteers help to transcribe their collection or internationally there’s the Gutenberg Project or LibriVox. By editing the transcriptions the aim is to corrects any errors in the automated versions, especially where the original was hard to read or hear, and make them easier for us all to find through search engines. It’s up to you how much you transcribe, although it does help if you at least edit the transcriptions or details that are important to you so they can be found again. Here’s an example to give you the idea. The topic is Minnamurra Falls, NSW.

END_OF_DOCUMENT_TOKEN_TO_BE_REPLACED

Was it six degrees of separation or merely a coincidence that this homeless portrait of the Campbell family, which was unearthed in an antique store in Ballarat, has a direct connection to Yass which was also featured in a post regarding coincidences?

END_OF_DOCUMENT_TOKEN_TO_BE_REPLACED

It can seem rather daunting to identify & date unknown photographs but there are often clues to be found in the photographs or other resources to help you identify their details, the who, what, where and when. Here’s one of a few I found in Ballarat which you may find interesting or useful, or you may even be able to help us with their story.

END_OF_DOCUMENT_TOKEN_TO_BE_REPLACED

Christmas cards have evolved alongside improvements in photography and printing techniques. Cards can be very useful as images when you don’t have the right picture so think about saving them as they reflect the priorities of the society or times in which they were produced. Christmas cards may include words, verses, motifs or pictures and may or may not be religious. What does Christmas mean today? How can cards help us with our family stories?

END_OF_DOCUMENT_TOKEN_TO_BE_REPLACED

Keeping It All Together

Even though, I thought my photo book was finished this was not quite the case. I nearly forgot to include the school photos! There are often photos that are separate to your main photos or albums that need to be considered if you are trying to put everything in one place. If any are larger than A4 you may need to take them to a photo scanning service or if they are damaged have them repaired or restored.

END_OF_DOCUMENT_TOKEN_TO_BE_REPLACED 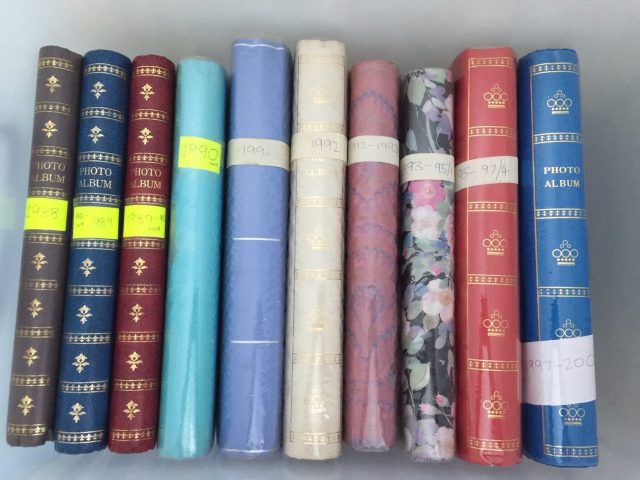 Little did I realise when I purchased the Epson FF680W how much it would be used over the last few months, while we have all been more or less confined to home. I have worked my way through several albums and scanned over 1500 photos. This has taken months as I empty the albums and keep the photos in order; clean & scan them as both 300dpi & 600dpi; store them temporarily and create a photo book. As the photos are scanned they are labelled with their year and number. Later, the details from the albums are added manually. This initially takes a lot of time but you get into a rhythm of scanning a batch one day, labelling it the next and so on. In this way, you slowly work through them all.

END_OF_DOCUMENT_TOKEN_TO_BE_REPLACED

Now that its nearly Christmas, why not think about all your Christmas photos hidden away in family albums, shoe boxes or drawers and whether you want to preserve and organise them for the future. Technology seems to have come to our aid with the Epson FastFoto FF-680W which I purchased to scan my many albums and to minimise the space they take up. It’s a huge job but so much easier than scanning one at a time.

END_OF_DOCUMENT_TOKEN_TO_BE_REPLACED

Who were the children of the Female Orphan School? 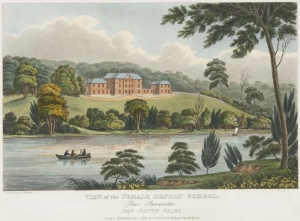 Fortunately, April Collison wrote a booklet on the history of the Female Orphan School (FOS), in 1986, which has been the starting point for all research into the school, its staff and pupils. She tells us that Governor Macquarie acquired the land in 1810, the foundation stone was laid in 1813 and the building finished in 1818. The Parramatta Heritage Centre has a blog with a timeline for the FOS and its history for further information.

What must it have been like for the seventy girls as they came up the river from the first Female Orphan School at the Rocks on 30th June 1818; with their Matron and Master, Ann and John Hosking; to this new and imposing building. The Hoskings had arrived in 1809 with their family after the Reverend Samuel Marsden had invited them and acquired a posting for them. John Hosking was the first free man trained as a teacher to arrive in the fledgling colony. However, the Hoskings decided to return to England only a year later.

Who were the girls and what was their story? Unfortunately, one way to find out is through the local cemeteries at St Johns & All Saints Cemeteries, at Parramatta. At All Saints Cemetery there are many unmarked graves which included children from local institutions such as the Female Orphan School. In 2004?, a memorial wall with 24 panels showing the names, ages and dates of deaths of these individuals was made to acknowledge and remember their passing. There must be a list with the names of the institutions as Judith Dunn’s book The Parramatta Cemeteries: All Saints & Wesleyan identifies how  many died from each institution from 1844 to 1870. There were 101 deaths from the Female/Protestant Orphan School in this time and the 1500 names on the plaques can be compared with other sources at the NSW State Records; Births, Deaths & Marriages and newspapers of the time. Sometimes we get clues to siblings or parents as well.

So far, these are a few of the children and families I have found. If you can help with corrections or any other information then please contact me and help us to remember them.

Alicia Hely/Healy/Healey was aged 5 when she was admitted on the 18.3.1840 with her two sisters, Charlotte, aged 8 and Anna, aged 2; their parents were George and Ann Hely. The BDM has her as Alice Healey. The Sydney Morning Herald gave a full account of Alice Healey’s malaise and treatment before she died ”in consequence of having eaten some poisonous herb” in the playground, although a thorough search did not find any there. The jury decided that over her last 2 days “all possible care” and “all available means” had been used to save the child’s life, but to no avail.

During the winter of 1849, 20 children died at the FOS, including Ann Hely, aged 11, who was probably Alice’s sister. It was reported in June that scarlet fever was rife at the FOS at this time, with 40 cases and 12 deaths. Was it their father George Healy, who narrowly escaped a Parramatta Court conviction for wounding with intent to murder,  in 1843? Or was he the mounted policeman heading to Parramatta who helped another wounded policeman in 1837? Was he both, or neither?? What happened to their mother Ann? What happened to the family in early 1840? Perhaps they just had to work and had no-one to care for the children. What became of Charlotte? Perhaps she was Charlotte Healey who married Thomas Garne? in 1861 at Parramatta or Charlotte Healy who married Thomas R Howel in 1851 near Berrima.

We catch a glimpse of the children’s lives in documents such as the following extracts from a government order regarding the transfer of girls from Sydney to Parramatta on July 30 1818, which reads as follows:

Although this Establishment is denominated an Asylum for Female Orphans, it is not meant to be exclusively confined to that Description ; as in cases where children are forsaken or abandoned by their parents, or have only one parent living, who is incapable of maintaining them;-such Children are to be considered eligible for Admission.

The children at the age of thirteen Years, or as soon afterwards as suitable situations can be provided for them, are to be bound apprentices, as servants, or otherwise, for five years, to such persons as the Committee shall approve; or until married, with the consent of said Committee…..

Each child on leaving the Institution is to be furnished with a Bible and Prayer Book ; and in cases of exemplary good conduct during their apprenticeship, they will receive a gift of a cow on being married, as a marriage portion, such marriage being approved of, by the Committee.

The Children are regularly to attend public worship on Sundays, at Church, clean and uniformly dressed.

The sixteenth day of August being the Anniversary of the foundation of the institution by Governor King, the members and friends of it will assemble on that day, in every year, at the Church of Saint John’s in Parramatta, to hear Divine Service, and a sermon…. after which the children are to be publicly examined in the church catechism, and new Testament, by the preacher; and the patroness and vice patronesses will award one or more silver medals to the best reader or repeater, or best worker in needle work, to be presented by His Excellency the Governor, and to be worn by the child during the succeeding year…. and His Excellency will distribute little rewards of books…. to those who shall receive a good character from their masters or mistresses.

Is it possible that any of these bibles, books or other momentos of the children have survived today?