Posted on September 9, 2013 by Explorers Tree

At the Forefront  of Technology 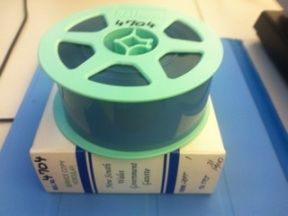 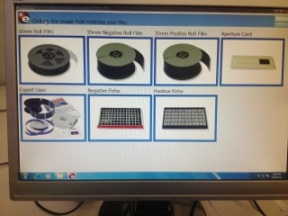 Way back in the dark ages before online genealogical indexes and searches existed many family history enthusiasts spent umpteen hours trawling through piles of old books, musty documents, microfiche and microfilms. Sometimes, this even became a family affair with different family members helping out. To some, it seemed like a good excuse for a picnic at the Rocks, after visiting the old Archives Authority in Sydney. Apologies to my family but they do remember these little excursions or our visits to cemeteries along the way.  Fondly, I hope.

The NSW Government Gazette is available on microfilm at the SRNSW but there is no online index so it is necessary to check the index at the beginning of each reel of microfilm. There were six reels for 1900 and it’s a matter of guesswork as to how it might be listed. At least, I had a date for John F. O’Reilly’s transfer to the Postmaster General’s Department but I wanted to know about the examination he sat for and the cadetship he won, presumably sometime in 1900, after he had sat his teaching exam. Fortunately, the State Records of New South Wales have these wonderful scanners that can fast forward or rewind the reels, zoom, focus or save to a USB. Thank you, they are great, no more hand winding or mountains of paper unless they’re all in use, of course. 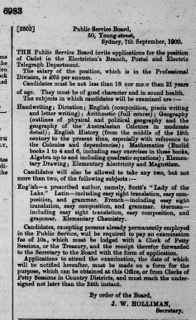 On reel 4704, page 6983, reference 2502 dated 3rd September 1900 was an invitation by the Public Service Board for applicants to apply for the position of Cadet in the Electrician’s Branch, Postal and Electric Telegraph Department. The salary was £65 per annum and in the Professional Division. ‘Candidates must be not less than 18 no more than 21 years of age. They must be of good character and in sound health’. Included was an extensive list of subjects to be examined including elementary Electricity and Magnetism. Candidates were also allowed to choose two prescribed subjects in English-Scot’s ‘Lady of the Lake’, Latin, French, German or Chemistry. Quite a range of general knowledge was obviously expected. 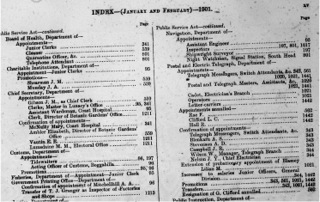 His Excellency the Lieutenant-Governor, with the advice of the Executive Council, and on the recommendation of the Public Service Board, has been pleased to approve of Mr. JOHN FRANCIS O’REILLY (Pupil Teacher, Department of Public Instruction), being appointed, on probation, for six months, as Cadet Electrician Branch, vice Warburton (vice seems to mean a deputy of some kind). Note: John stayed 40 years.

At this time, Sydney was still lit by gaslight which had been in operation since 1841. Electric light did not appear in Sydney until 1904 as this Trove article and picture show from the Australian Town and Country Journal on 13th July, 1904. Imagine the delight of a 20 year old to be in the front line of the advance of electricity, it must have been mind blowing. I’m glad to have unearthed John’s story, Wow!