Trove is an extremely valuable resource and it’s free, thanks to the National Library of Australia. The digitised newspapers may need editing but if we all do a little when we visit it helps everybody. It is possible to save an article as a jpeg or pdf or copy and paste the text. Sign In and you have access to other facilities including saving to lists so you can locate the books, articles, photos or website at a later date. These can be made public or private and even enables you to add comments or reminders. Many Australian libraries and institutions have included their images as part of the Trove database. Check it out. You’ll soon be addicted or maybe join the corrector’s Hall of Fame!

Unfortunately, I have not unearthed a photo of Maude but I was fortunate to be sent a photo of Maude’s Kookaburras by the Wormersley website. Thank you. In 1936, The Daily News, W.A. included the following article in the Women’s Varied Interests Section with a wealth of information about Mrs. (Maude) O’Reilly, the artist.

Specialises in Pottery and Modelling 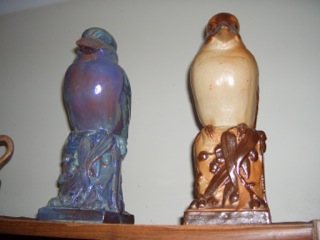 Mrs. J. F. O’Reilly, wife of the new superintendent engineer to the P.M.G’s Department, in Perth, who has been transferred from Melbourne, is a talented artist. She was born in New South Wales, and educated in Rockhampton and Brisbane. She began her studies in art at the Art School in Brisbane, and later studied at the Royal College of Art, South Kensington (London).

Mrs. O’Reilly is interested in all types of art, but specialises in pottery and modelling, and she prefers water colors to oils. She was the first Australian to have a model of an Australian bird accepted in the Sculpture section of the Royal, Academy, London (Burlington House)— a model of a kookaburra executed in Ceramic art. Another honor bestowed upon her was the sending of examples of her work by the Queensland Government to the Wembley Exhibition, London, in 1925- 1926.

In 1926, when Mrs. O’Reilly was in London, she had 3cwt. of three different kinds of Australian clay sent to London for her own use. She experimented there with suitable glazes to fit the bodies for prevention of minor defects, such as crazing and pin-holes.

In appreciation of the quality of her work, the Agent-General for Queensland arranged an exhibition of her pottery containing vases, bowls, statuettes, etc., at the offices of the Agent General, the Strand, London.

Speaking of her work, Mrs. O’Reilly said, “I concentrate, on good form and proportion with good quality glazes in suitable and subtle colorings, rather than decorations, for my vases and bowls, for I always argue, why put flowers on the exterior of a vase or bowl, which is later filled with flowers?”

While in London, the artist studied all the different periods of pottery at the National Museum, London, and she was particularly interested in the wonderful Chinese Ming and Sung pottery. Of this wonderful Chinese pottery, the Victoria and Albert Museum has many priceless examples. A replica of her kookaburra in the Royal Academy was secured by the Commonwealth Government of Australia to be placed in the Government House at Canberra.

Mrs. O’Reilly has lived in every State in Australia, and for the past eight years in Melbourne. In Melbourne she attended out-door sketching excursions every week. A group of fifteen or twenty art students would set off on Saturdays for the studio home of one of Australia’s, leading artists, Mr. John Rowell, at Bayswater, about twenty-five miles from Melbourne. At these outings each student would receive an individual criticism of his or her work from Mr. Rowell, which was very helpful and much appreciated.

Mrs. O’Reilly spoke of the various methods used in making pottery. The statuettes, she said, are painted with an underglaze paint on the biscuit (so-called after the clay has been once fired), then clear-glazed and returned to the kiln for a second firing.

But, she said, pottery and statuette work was a gamble, as sometimes one would create a large number or articles, experimenting with glazes and heat many times before a perfect specimen was turned out. She has not been interested in the commercial side of her work, but has concentrated on quality and has created mostly only one piece of each kind.

Mrs. O’Reilly is contemplating an other trip abroad next year, and while in London, hopes to secure an electric kiln to have installed in her home in Perth.

Trove and 33 other libraries have copies of L.J. Harvey & his school (Cooke, Glenn R & Edwards, Deborah & Queensland Art Gallery, 1983) which has a very short biography of Maud(e) O’Reilly and a photo of a 1926 kookaburra but alas, none of Maud(e). Surely, with all that travelling someone must have taken a photo. It would still have been a long journey on a boat in 1926 or 1937! What about passports?Wonder if the Governor General in Canberra still has one of the Kookaburras?